The hair transplantation is a relatively new sector of aesthetic surgery. The most modern technologies in this field are being applied in our clinic giving excellent results and a high percentage of survival of the transplants.

In 1941, Hamilton described the patterns of male baldness defining 8 most wide spread types of hair loss using a standard line of simple drawings. In 1975 it was improved by Norwood, who added 4 more stages. Scheme 1 presents one of the most popular baldness classifications, where the patient can recognize his type of hair loss.

Scheme 1. Classification of baldness, according to Hamilton-Norwood 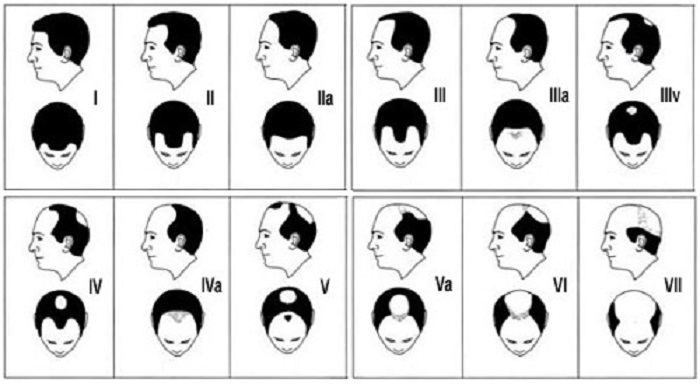 Following is a description of each stage of baldness, according to the classification of Hamilton-Norwood:

І stage- corresponds to the normal hair growth in the mature age. Very minor recession of the hair line in the temple area.

ІІ stage - slight recession in the temporal area, hair becomes less dense in the front end of the perm. The recession is symmetrical.

ІІІ stage - lowest extent of hair loss, deep recession at the forehead, which is bare or only sparsely covered by hair.

ІІІvertex stage (at the crown) – the hair loss is restricted around the crown plus deep recession at the forehead (no more than in the ІІІ stage).

V stage - the bare spots in the areas of the forehead, the temples and the crown are broader than in ІV stage. There is a narrow band of sparse hair bridging these sections.

VІ stage - The bridge of hair between the forehead and the crown has now been lost; the baldness spreads at the side and the back.

VІІ stage - This is the most advanced or severe form of hair loss. Only a narrow band of hair in a horseshoe shape survives on the back of the scalp. This band begins over both ears and goes back to the lower border of the nape. There is no hair in front of the ear backward and downward. The hairs of the remaining narrow band are usually sparse, shorter and thinner. The hair is distributed mostly along the back of the neck, the lower line of hair growth at the nape being considerably shorter.

In Scheme 1 all stages, designated with „А“ in accordance with the Hamilton-Norwood scale, have two important peculiarities. First, the backward recession is usually along the whole line of the forehead covering its middle section as well. Second, there is no baldness of the crown parallel to the above described change. The hair loss at the crown emerges at the expense of the continuous backward recession.

The transplantation method is a semi-automatic FUE technique, involving extracting of implants (hair bulbs) by a special device from the donor zone – over the ears and under the nape. Then they are processed and transplanted in the desired area. The transplanted hair grows. It can be cut and dyed. After a period of six months the aesthetic effect is excellent.