Labiaplasty for the Labia Minora (Inner Lips of the Genitals)

Surgical reduction of the labia minora

This (by far the most frequently requested form of labiaplasty) is the procedure that reduces the size or length of the labia minora, and it is the method we shall discuss in greatest detail. This operation began for legitimate medical purposes many decades ago. Prior to the late 1990's, it was exclusively performed using what is now called the "trim method" or "strip method". Then, in the late 1990's, the "Wedge" method (also called the "V"method) was introduced. Consequently, we now have two distinct types of labiaplasty to reduce the size of the labia minora. I'll describe each, since I utilize both methods, individualizing my choice to the varying needs of my labiaplasty patients. Always, I discuss with patients which of the two methods would be their best option.

The "Trim" method of labiaplasty 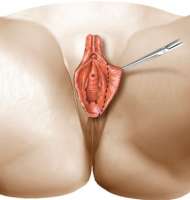 This type of labia reduction for the labia minora is the simplest to perform and the easiest to understand. Because of this, it's the technique utilized by the largest number of labiaplasty surgeons, and for many of these surgeons it is, unfortunately, the only method with which they are familiar. Since many patients request that their labia minora be reduced to the level of their labia majora (or even below that level) and that the dark labia minora edges also be removed (to give them a pinker and more youthful appearance) the trim method is frequently chosen.

With this type labia reduction, the surgeon trims off a long strip of the edge of the labium, removing that unwanted portion. The new cut edge is then sutured so it will heal promptly and, hopefully, form minimal scar. This accomplishes two significant changes for the patient. It achieves labia reduction, removing the thick, dark labia margin, and leaving a pinker and more delicate labial edge. It also reduces the excess length of the labia minora, positioning them more inconspicuously just within the natural folds of the labia majora.

As a concession, the new pinker labial edge does contain a surgical scar that, on occasion, may be overly sensitive. In addition, many believe this technique excessively alters the natural appearance of the female genitals, because it has removed the normal appearing edge and replaced it with an edge different in color (pinker) and different in texture. You, as a patient should help your labiaplasty surgeon with this decision.

The "Wedge" method of labiaplasty 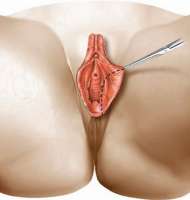 This labia reduction technique (sometimes referred to as the "V"method) was first introduced by Beverly Hills plastic surgeon, Dr. Gary Alter. He initially published a description of this technique in 1998, in the plastic surgery literature. Following his lead, I too have incorporated this method into my own labiaplasty practice.

This operation serves to reduce the size and length of the labia minora by removing a "V" shaped wedge of unwanted labium. The edges of this open space (resulting after removal of the unwanted area of labium) are then sutured together, forming a straight line (or "I" shape) with no visible scar along the labial edge. It not only reduces labial size, but it does so without stripping away the natural margins of the labia, therefore preserving a completely normal appearance of the female genital structures. Also, this avoids the need to create a scar running the length of the labium, thereby minimizing the possibility of prolonged uncomfortable oversensitivity during an extended healing phase.

However, if it happens to be the appearance of the labial edge itself, to which you mainly object (because of the dark labia margin color and/or thickness) then this method may not be your ideal choice. Again, as a labiaplasty patient you must help your plastic surgeon with this important decision.